Power Board with MIDI/Audio Light Controller

What is it?
When I was a teenager (early 80's,) I was very unimpressed at what Christmas lights could do and I wanted to make them more interesting. Our lights back then had 16 bulbs, so I cut the string into 4 pieces, made a 50V power supply with 4 power BJTs, and used 2 TTL's (7400 and 7493) to control the lights. My first "binary" Christmas lights!
Last year, after I started experimenting with MSP430, I decided to do another Christmas lights controller, but time more powerful and more versatile than the ones available on the market. At about the same time, I was doing some MIDI projects, and decided that this is the way to go, use MIDI to control my lights. The idea was that you can use MIDI sequencer to create a soundtrack as well as a light show. Then one day, nostalgia set in and I decided to add audio control, turning my unit into a color organ (yes, I still remember 70's.)
After creating my prototype,  I have finalized my design and created two boards: Light Controller board and Power board.
Light Controller
The Light Controller board is 2" by 2" and is designed to control 16 parallel channels. It has a MIDI input, audio input, 3 configuration switches, zero-crossing detector, and MSP430G2553 MCU. Both inputs can be used at the same time. MCU can be re-programmed in circuit making customizations extremely easy.
Power Board
The Power Board is 4" by 4" and has 8 channels. It was designed so that it can be used not only with the above Light Controller board, but also as a serially controlled board. There are parallel in/out headers, which can be used for connecting a second Power Board bringing total of channles to 16 (only one LC board is required.)
There are also serial in/out headers, which (with optional 74HC595) allow connecting several boards in a row. The number of boards is limited only by the timing and the software.
The default opto-couplers are random phase (LC board uses it's zero-crossing detector to sync to line voltage,) but zero-crossing opto-couplers can be used for non-dimming applications.
Additionally, there is a place for snubber components which are required by some triacs. The default triacs are snubberless and require only one resistor.
Schematic and sample code are available upon request.
Working prototype (MIDI) 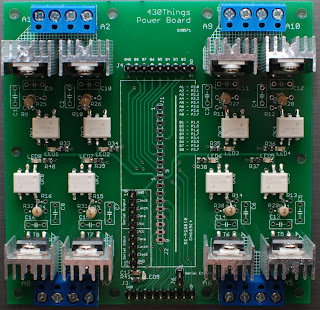 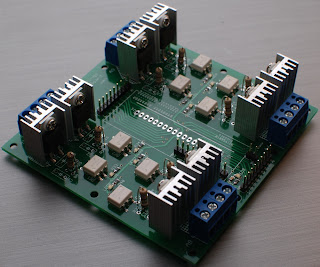 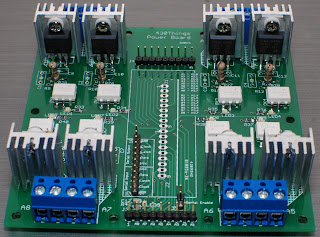 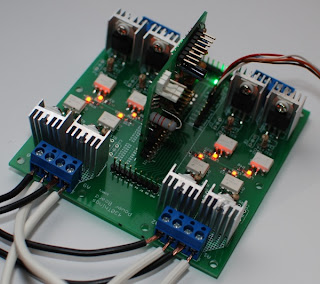 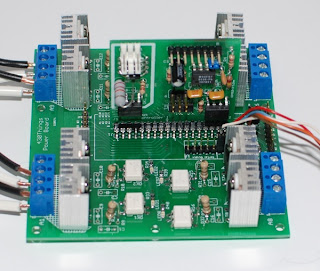